Greetings, brave adventurers! You’ve stumbled upon one of our guest blogs! If you’ve been burning to put quill to parchment over an idea, be sure to send it in to us, sendingstone@heroesrisepodcast.com and your ideas could be featured here!

In the blue corner, weighing in at “more than enough to make a grown horse cry” with his heavy armor, we have the defending champion, the Life Domain Cleric!

In the red corner, sporting charm, naturally radiant hair, and divine favor in his blood, we have the challenger, the Divine Soul!

Tonight, we’ll watch these two professionals dive into the fray to see who will take home the title of Supreme Healer of D&D!

Xanathar’s Guide to Everything added a large amount of new material to the D&D Universe.  While browsing the new content, the Divine Soul origin for the sorcerer was one of the subclasses that caught my eye.  With its obvious influences from the Favored Soul class from 3rd edition, I was curious how they would translate the class to 5th edition.  The result is an interesting amalgamation between a healer and a blaster with the flavor of sorcerer thrown in. As I was reading through the description, I decided to do some math on the ability of a Divine Soul being able to out-heal a Life domain cleric.  My initial hypothesis was the healing from Twinning a spell such as cure wounds, or gaining additional spell slots would make the Divine Soul the new go-to class for keeping the party alive.  While it is a very strong healer, the actual numbers surprised me. Before I get to the finer details, I’ll first give a brief overview of the two classes.

When I first skimmed the details of the Divine Soul, my immediate reaction was that it would replace the cleric due to the availability of sorcery points.  It has a number of interesting class features that create a flavorful alternate healer that can deal damage, similar to a Light domain cleric, but it is also capable of powerful multi-target burst healing thanks to Twinned Spell.  If Subtle Spell is selected, it allows the party to have some healing during times that they are silenced (something I’ve recently encountered). The Divine Soul also has the ability to spend a Sorcery Point and re-roll any number of healing dice, allowing for a potentially better heal, especially if the dice are feeling particularly cantankerous and roll a lot of ones.  Additionally, the Divine Soul has full access to both the cleric spell list and the sorcerer spell list, giving it unprecedented access to a massive list of spells, both arcane and divine.

The Life domain cleric’s Disciple of Life ability adds 2 + the spell’s level in additional healing.  This ability is extremely powerful and adds a great deal to the minimum healing amount that any spell gives.  It’s very efficient with first and second levels spells, and adds a nice bonus when using higher level spell slots for cure wounds or healing word.  Adding the bonus to the area heals, such as mass cure wounds and especially mass healing word, provides great clutch healing in tight situations where there is a lot of area damage.  Additionally, the 17th level ability to maximize all healing dice when casting a healing spell creates a phenomenally powerful late-game healer, able to handle the most grievous of wounds in a timely and spell-slot efficient manner.  Once they gain the ability to chip heal themselves with Blessed Healer at 6th level (2 + the spell’s level to self when healing other) and perform emergency healing through Channel Divinity (cleric level x5, not healing the targets above half their maximum hp), the Life cleric has a solid base to carry the party to victory.

They Did The Math

I decided to perform a rudimentary numerical analysis on the healing capabilities of the two classes.  The method I used for this analysis was as follows:

I calculated a Twinned Spell as effectively adding an additional spell slot at the cost of sorcery points and prioritized the highest level spells available rather than Twinning the most spell slots.  In Computer Science, this is known as a greedy algorithm.  Although this approach is rarely 100% optimized, it does allow us to find some obvious patterns and is significantly easier to calculate. Additionally, I assumed that the player would have a +3 spellcasting ability modifier at levels 1-3, a +4 at levels 4-7, and a +5 for all levels beyond that.  While there are magic items that can increase these modifiers, I assumed they were not in play. I analyzed the spells healing word, cure wounds, and heal, as these are the primary methods of restoring health to party members that are single-target, twinnable spells.  Finally, I assumed for each spell analyzed, that was the only spell the player cast. For example, when analyzing cure wounds, I assumed that both classes would only use cure wounds for every spell slot available.  For heal, I only assumed the player used 6th level spells and above, and does not take other spells of lower level into account.  The mass x spells, such as mass cure wounds and mass heal are not compared in this analysis.

And The Winner Is…

When I broke down the numbers, I was very surprised at the results.  Despite having the ability to Twin spells, the Divine Soul sorcerer is inferior to the Life cleric at almost every level, with a handful of exceptions.  Once the Life cleric hits 17th level, it massively outperforms the Divine Soul when using any dice-based healing spells, as all healing dice are maximized, unless the heal spell is used.  Due to the low number of 6th level and above spell slots, heal’s potency is generally in favor of the Divine Soul due to the potency of Twinned Spell.

On the collaborative side, the combination of a Divine Soul and Life domain cleric is powerful.  The Divine Soul provides high-damage blasting or arcane utility while still being able to support the cleric with healing when overwhelmed.  When applying Empowered Healing at 6th Level to either the Divine Soul or another cleric, rerolling bad healing dice can make or break a critical combat encounter.  Rolling two or three 1’s on 3rd level Cure Wounds can hurt the party almost as much as taking damage. Having the chance to mitigate the fumbles can be the difference between victory and defeat.  This is especially important in campaigns that limit the resources provided to the players, such as Curse of Strahd or Out of the Abyss.

The major drawback, however, is the limited number of spells the Divine Soul can know, with a maximum of 16 known spells at 20th level. Assuming a Divine Soul takes the Good affinity and gets cure wounds for free, it will require two more known spells to learn what was analyzed today.  If the player wants to spec into a full pocket healer, there will be little room left for utility or blasting.  Important spells such as revivify, resurrection, and the restoration line will compete with both crowd control and blasting spells, such as stinking cloud and fireball.  This will require additional planning on the player’s part ahead of time, as the limited ability to swap spells can cripple a player who makes a bad choice.

Ultimately, the Divine Soul is a very interesting class that offers a great deal of versatility to the sorcerer class that isn’t blasting if the player is opting for a supporting healer build. This provides a great pocket healer that can support the Life cleric in large parties of 6 or more without diminishing the party’s damage output too much.  While it does lose its damage potential when optimized for healing, it also outperforms all cleric domains except the Life domain in raw healing power. This class is a great addition to 5th edition, and I look forward to seeing it at the table. 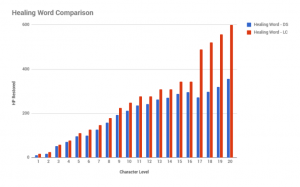 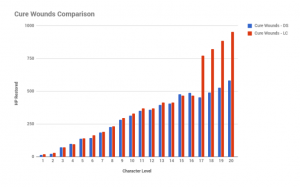 Gath Memvar has been engaged with D&D since 2005.  His favorite D&D activities include creating custom monsters, comparing / contrasting different classes, finally not playing the Cleric, and homebrewing rules.

Next article Are We Going To Die?