Greetings, brave adventurers! You’ve stumbled upon one of our guest blogs! If you’ve been burning to put quill to parchment over an idea, be sure to send it in to us, sendingstone@heroesrisepodcast.com and your ideas could be featured here!

“Hah, it’s just a kobold!” Halvor laughed, “And to think we were worried!”

“As well you should be,” noted the kobold before incinerating him with a fiery exhalation.

One of the core aspects of D&D is monsters.  From goblins to orcs, undead to celestials, and wild beasts to dinosaurs, D&D has a long history of wonderful and fantastic creatures for players to encounter, fight, or negotiate with.  One of the best aspects of a homebrew campaign is creating creatures that are specifically built for your story, or making something unique that will really challenge the players. While published campaigns are more structured, it can be fun to tweak an existing creature to better suit the storyline your party is exploring, or have it react to what your party is doing.  One of my favorite features about 5th edition is the DM’s Workshop section of the Dungeon Master’s Guide, specifically the section about creating custom monsters and spells. The Workshop contains a great deal of excellent content on how to create, refine, and balance a creature appropriate for its Challenge rating. This article is the first of a three-part series exploring monster creation and modification.  First, we will discuss a simple tweak to an existing creature. In part two, we’ll discuss creating a monster from scratch and learn how to assign it an appropriate Challenge Rating. Finally, we will conclude with tweaking the numbers on monsters to mathematically challenge your party more appropriately.

Congratulations, you are running a D&D game!  You’ve got all the ingredients laid out: Players, dungeons, an epic storyline, and monsters.  The problem, though, is your party is perhaps very experienced, unusually clever, or especially well-equipped, and you need to modify some existing creatures.  What if you’ve never created or modified a creature before? There are a lot of rules in place for creating monsters, and you just want a quick example. For this exercise, I’ll be using a kobold for the example, and The Homebrewery to provide the stat blocks.  If you’re in a hurry, need the tl;dr, or just don’t care about the discussion, you should be able to skim over the provided monster stat block examples to see what you need to do.  For a complete discussion, read on!

So you’ve been wanting to really challenge your players, but you want to do it your way.  The monsters in the Monster Manual are excellent material, but they’re just missing that spark that would really tie your world together.  Maybe they’re missing some abilities, maybe they’re weaker than you want them to be, maybe you just want to go crazy with a low-level creature.  Fortunately, monsters are easy to modify. For our first example, let’s look at the common kobold as taken from the Monster Manual: 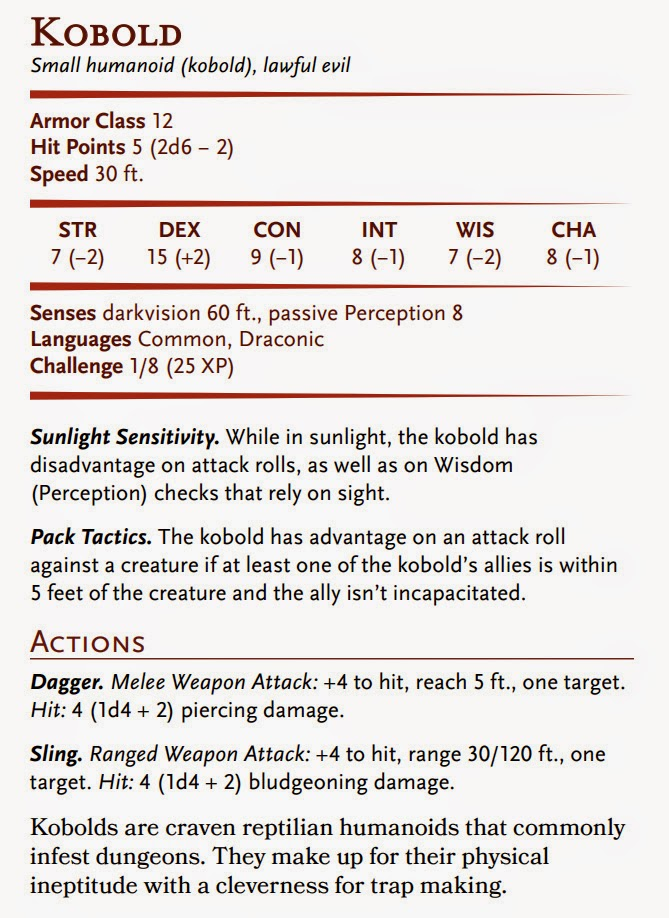 This is a fairly simple monster with a low challenge rating, making it a great creature to start with.  Let’s say you’re running a game where you have given the PCs a lot of magic items early, or they are extremely capable during combat.  What if you had some kobolds become curious and drink a bunch of potions, and they’re now tougher, smarter, and more observant, plus gain a new ability.  What would that look like? First, we start with a change that is fairly straightforward: stat increases.

Increasing ability scores is an excellent way to reflect the basic abilities of a creature.  By increasing the kobold’s constitution, intelligence, and wisdom scores, it shows the improved capabilities of the creature, making it a simple way to change the flavor of the monster.  Let’s increase the kobold’s constitution score to 10, Intelligence to 10, and Wisdom to 9 to reflect the changes incurred by the potion binge.

Due to its increased constitution score, the modifier has has increased from -1 to 0, so we need to give it extra hit points (HP) to reflect this change.  Currently, the Kobold has 5 HP, calculated by the average of 2d6 – 2. Since its constitution modifier increased by one, we give the kobold one more HP per hit die.  This brings the HP calculation to 2d6 + 0, raising its average HP to 7 and its maximum HP to 12, which is pretty tough for a kobold! The improved Intelligence and wisdom scores help its overall resistance to mind-affecting spells, making it slightly harder for that bard to use vicious mockery on. Should you want the players to interact with the creature, the improved reasoning scores can provide some fun role-playing opportunities, as well.  Additionally, improving its wisdom score also increased its passive perception slightly, reducing the ability for PCs to sneak up on it. A great example of a modified kobold is Deekin from the Neverwinter Nights video games.

So you’ve got a smarter, tougher kobold, but a few stat increases really isn’t all that you wanted to do.  After all, it still needs that special ability for a little bit of flavor. Hmmm, what if one of those potions it drank was a potion of fire breath?  What if the fire breathing effect became permanent?  How do you add that to the kobold? To start, let’s review what our enhanced kobold looks like: 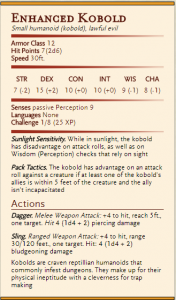 That looks pretty good! A second or third level party fighting a mixed group of  enhanced kobolds and regular kobolds would be in for a surprisingly tough fight.  But remember, your characters are unusually resilient, so now our kobold needs to breathe fire.  According to the Dungeon Master’s Guide, a potion of fire breath deals 4d6 damage and requires a DC 13 Dexterity saving throw for half damage.  We need to add this information to the Actions section, giving it the ability to be a nasty surprise.

First, we need a name for the kobold’s newfound ability.  Although we could come up with something silly like conflagrating halitosis, let’s stick with fire breath for now.  Since a potion of fire breathing already has damage and saving throws calculated for us, let’s just use those to save ourselves some work.  Finally, we’ll need to update the name of the creature at the top, and the description of the creature at the bottom.

And done.  We want to change the name of the creature to “fire-breathing kobold” to reflect its further enhancements.  The creature is most definitely stronger than the written Challenge rating of 1/8, but we’ll cover calculating Challenge rating in the next discussion.

As you can see, modifying existing creatures is very easy and can add some fun flavor to your campaigns.  If the creatures your PCs are fighting are too easy or predictable, be sure to change things up a little bit and keep it fresh.  In Episode 13’s listener feedback, @Happy_KillMoar suggests a modification to trolls, including absorbing fire but being vulnerable to water. This is a great modification to a monster that adds a bit of flavor without making too many modifications, and is easily done.

In the next article, we will discuss creating a creature from scratch and assigning an appropriate challenge rating once built.  Farewell, fellow DMs! May your tables be full, your stories epic, and your battles entertaining and engaging!

Gath Memvar has been playing and DMing D&D since 2005.  His favorite D&D activities include creating custom monsters, comparing/contrasting different classes, finally not playing the cleric, and homebrewing rules.

Previous articleHeroes Rise, nineteenth entry: One Page To Rule Them All